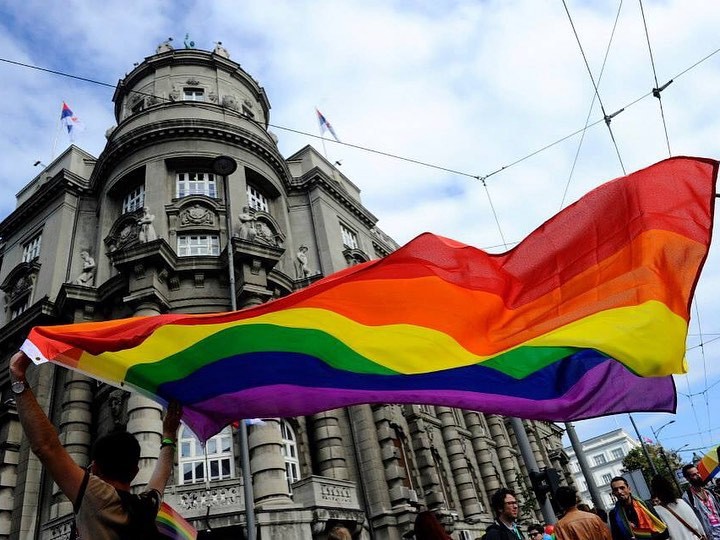 While joining the EU could be key to helping make gender recognition and same-sex marriage a reality in Western Balkan countries, the blocking of Albania and North Macedonia’s next steps towards membership is having the opposite effect.

Four of the five countries who are candidates for future membership of the European Union have basic protections for LGBTI people in place (the fifth, Turkey actively oppresses LGBTI people). However, in this group of countries, Albania, Bosnia and Herzegovina, Kosovo, Montenegro, North Macedonia, and Serbia (collectively known as the Western Balkans), the human rights situation for LGBTI people has remained stagnant for several years, and is now at risk.

ILGA-Europe’s LGBTI Enlargement Review 2019, carried out by our advocacy team in co-operation with the Equal Rights Association (ERA) and our member organisations in the Western Balkans, shows that the accession process of the European Union is crucial for the advancement and protection of current LGBTI rights in the region, along with all other human rights. Nevertheless, in October last year, France refused to begin accession negotiations with both Albania and North Macedonia, while Denmark and the Netherlands expressed reservations about setting a date for opening negotiations with Albania.

A basic guide to accession

The European Union is the political and economic union of 27 countries (it was 28 until January 31 this year, when Brexit took place). Membership is open to countries who respect and promote the founding values of the EU: “human dignity, freedom, democracy, equality, the rule of law and respect for human rights, including the rights of persons belonging to minorities.”

This year there will be a real opportunity to create momentum for achieving legal gender recognition and recognition of same-sex partnership in the Western Balkans. Montenegro, North Macedonia and Serbia will have parliamentary elections, and the newly elected government in Kosovo could be positive towards LGBTI rights. The EU’s voice of encouragement could be central in ensuring the adoption of much-needed legislation.

The big LGBTI issues in the Western Balkans

Lived reality for LGBTI people remains starkly different to the protections which exist on paper. Implementation of existing legislation remains a prominent issue, and while hate crime legislation on grounds of sexual orientation and gender identity exists in a majority of the accession countries, identifying the hate element in some crimes against LGBTI people remains problematic.

Access to healthcare for trans people remains an issue in the Western Balkans, both for trans specific healthcare as well as for non-discriminatory access to general health care. Intersex people are largely invisible across the region, with only Montenegro and Bosnia and Herzegovina having added sex characteristics as a protected ground against discrimination. Hate speech laws do not name grounds of sexual orientation and gender identity in Kosovo or North Macedonia.

None of the EU accession countries has policies designed to tackle hate speech in place, yet hate speech is a prevalent issue in all of them, both in the media and on social media, often coming from political players.

Public attitudes, while improving in a number of countries, continue to be predominantly negative. This year there are concerns that Sarajevo Pride might be blocked from taking place by local authorities. LGBTI people need state support for Pride marches and other events because they are essential for the visibility and empowerment of the community.

In danger of losing credibility

The EU and the accession talks can be a driving force for sustainable change for LGBTI people in the Western Balkans. However, the decision to keep the doors closed to North Macedonia and Albania puts into question the credibility of the accession process throughout the region, a process which has been fundamental in improving the legal rights and social acceptance of LGBTI people.

The European Commission has recently revised the enlargement methodology and hopes EU leaders will approve it along with opening accession negotiations with Albania and North Macedonia, before the upcoming EU-Western Balkans Summit in May. The opening of accessino talks is also one of the the conclusions of our LGBTI Enlargement Review 2019, which was sent to the European Commission this month.

By stopping the EU integration process last October, France, Denmark and The Netherlands put every LGBTI person and group in the Western Balkans once again at risk of increased marginalisation and of being left behind.

Although achieving EU membership can take several years, even decades, the accession process can already have a positive impact in LGBTI people in a candidate country. We speak to activists in the latest candidates, Ukraine and Moldova, and from Montenegro, which has been a candidate since 2010.
read more
Podcast

The Frontline: LGBTI Equality and Accession to The EU

In this two-part episode of The Frontline podcast, presented by Belinda Dear, we’re looking at the new wave of accession to the European Union and […]
read more
News

It is with great disappointment that ILGA-Europe and ERA received the news of the decision of the Constitutional Court of North Macedonia to repeal the Law on Prevention of and Protection against Discrimination on 14th May 2020.
read more
Report

A letter sent today (27 January) to the Croatian Presidency by ILGA-Europe and the Equal Rights Association (ERA) stresses that opening accession talks with North Macedonia and Albania is critical in protecting LGBTI rights.
read more
Report

On 17 April 2018, the European Commission recommended launching accession talks with Albania and FYR Macedonia, both of which have up until now been candidates […]
read more
Report

This paper was composed by ILGA-Europe, on behalf of Sarajevo Open Centre, to inform decision-makers in both the EU and its accession countries in the […]
read more
Report

Meeting the challenge of accession