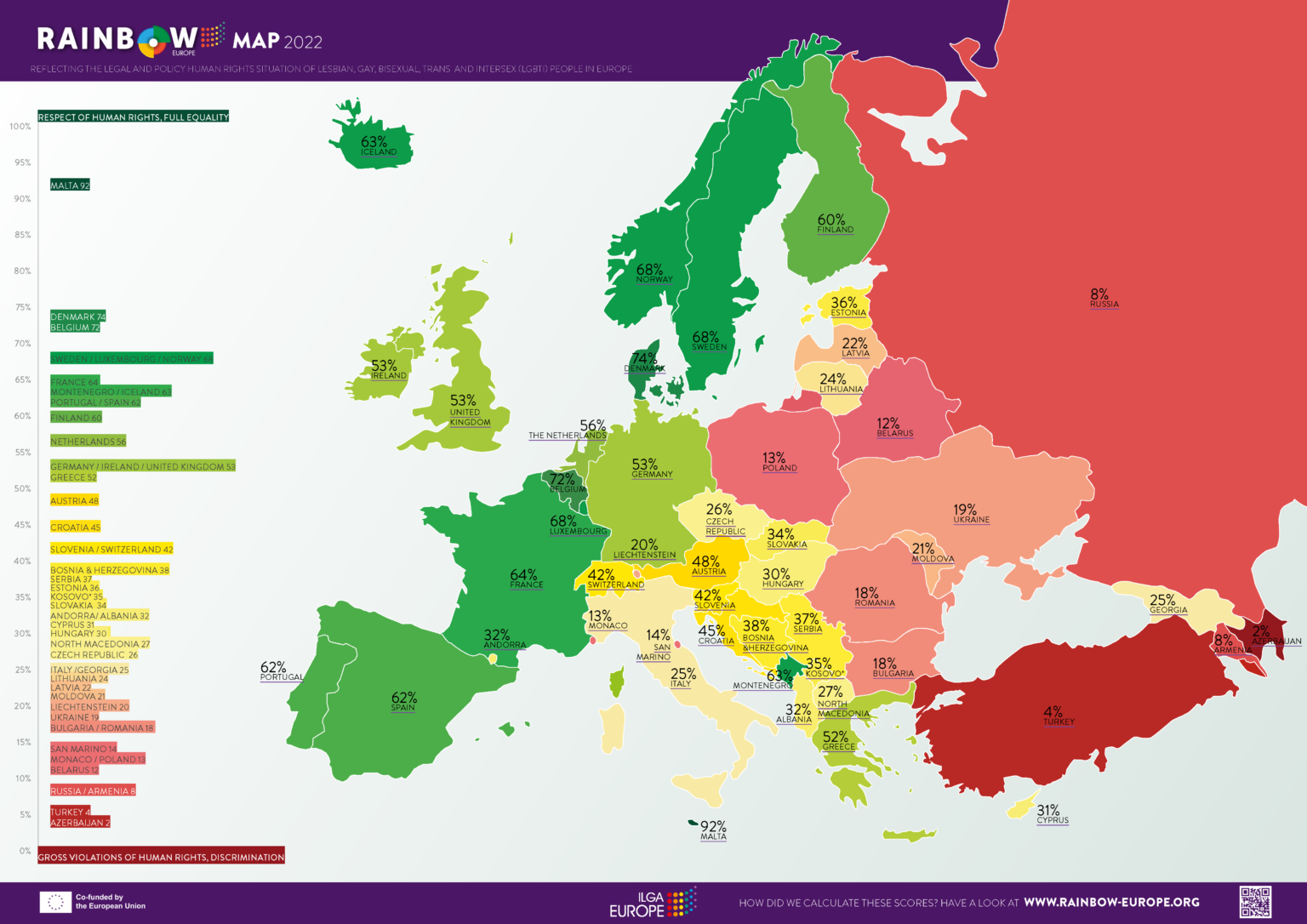 Our brand new Rainbow Map shows steps forward in LGBTI rights in several countries, spelling out that equality is at the core of democracy in Europe. But while some are pushing forward, others continue to instrumentalise LGBTI discrimination to erode freedom.

ILGA-Europe’s 2022 Rainbow Map, which ranks the legal and policy situation of LGBTI people in 49 countries, shows that a new dynamic has appeared in the last 12 months to fill in the gaps that exist around LGBTI equality, and push standards at a time when democracy in the region is being challenged.

After several years reporting a disturbing standstill on LGBTI rights, the latest Rainbow Europe Map and Index identifies steps forward in LGBTI rights in several countries, with the clear understanding that equality and freedom for all are at the core of democracy. But while some are pushing forward, others continue to exploit anti-LGBTI sentiment as part of an agenda to erode freedom and equality.

Here are some examples of this positive movement for LGBTI rights across Europe:

But it’s not all good news. Here are the countries sliding backwards on LGBTI rights:

A few words on Ukraine

It is worth mentioning that in Ukraine, before the Russian invasion, there was cautious optimism from LGBTI activists about the way forward, as seen in our Annual Review. Several politicians were willing to discuss legislative rights. Post-war this should provide the country with a bedrock on which to build a legislative framework that protects all its citizens, and a society that values LGBTI people as part of its democratic composition.

The ILGA-Europe Rainbow Map ranks 49 countries in Europe on a scale between 0% (gross violations of human rights, discrimination) and 100% (respect of human rights, full equality). This year’s map also tells the story of an evolving movement. A brand-new category, “Intersex bodily integrity,” has been introduced. This is because for our movement in Europe, equality and non-discrimination laws, legal gender recognition, bodily integrity, protection from hatred and violence, family rights, and protection of asylum seekers are all interconnected and equally essential for the full enjoyment of human rights for LGBTI people.

Although achieving EU membership can take several years, even decades, the accession process can already have a positive impact in LGBTI people in a candidate country. We speak to activists in the latest candidates, Ukraine and Moldova, and from Montenegro, which has been a candidate since 2010.
read more
Blog

Children born intersex are at risk in most European countries. Here’s why

ILGA-Europe’s Rainbow Map of the legal situation for LGBTI people in Europe has a brand-new category: Intersex Bodily Integrity. It’s an essential expansion, because in across Europe and Central Asia, intersex people, and especially children, are still at risk.
read more
Report

The 2022 Rainbow Europe Map finds that over the past 12 months a new dynamic has appeared to fill in the gaps that exist around LGBTI rights and push standards, giving governments ground to build upon as democracy in Europe faces exceptional challenges.
read more
Press Release

A New Dynamic Has Appeared in LGBTI Rights Across Europe, Rainbow Map Reveals

Every year, ILGA-Europe publishes our Rainbow Map, charting LGBTI rights in 49 European countries. But we’re not the only benchmarking map on the scene. From sexual orientation laws in the world to inclusive churches in Europe, these charts depict the state of LGBTI rights and more across the world.
read more
Podcast

Every year, Rainbow Europe ranks all 49 European countries based on the laws and policies in each to ensure equal rights and protection for LGBTI […]
read more
Blog

No news is not always good news: the deadlock on LGBTI rights in Europe

Published on May 17, ILGA-Europe’s Rainbow Europe Map & Index 2021 reveals a disturbing stand-still on LGBTI human rights across Europe. But what are the reasons for this deadlock, small advancements and worrying regressions, and navigate more maps on LGBTI rights in the region.
read more
Press Release

As the 2021 Rainbow Europe Map reveals widespread and almost complete stagnation on human rights of LGBTI people, we are at a juncture when governments can actively […]
read more
Report

The shocking state of LGBTI children’s rights in Europe

We expect all children to be protected from violence and discrimination, and to have access to appropriate legal protection, but in the EU the truth is far from this case, and LGBTI children are particularly vulnerable. Here’s why.
read more
Press Release

In light of the COVID-19 crisis, the annual ILGA-Europe Rainbow Map shows we have come to a pivotal moment for LGBTI people’s human rights in the region.
read more
Report

ILGA-Europe Rainbow Map and Index 2020 reveals that once-leading countries in Europe are falling behind in their commitments to equality for LGBTI people. Key findings […]
read more
Press Release

ILGA-Europe’s annual benchmarking tool, which ranks 49 countries in Europe on their LGBTI equality laws and policies, reveals not only a standstill but a visible […]
read more
Press Release

ILGA-Europe’s annual benchmarking tool, which ranks 49 countries in Europe on their LGBTI equality laws and policies, reveals a region where advances are not being […]
read more
News

Legal gender recognition in France and Norway. Civil unions in Italy. A ban on conversion therapy in Malta. These are just some of the major […]
read more
Report

Where legal protection of the human rights of LGBTI people is concerned, there is gradual progress in many European countries. However, Europe as a whole […]
read more
Report

Lately, we heard a lot about marriage equality debate in France and the large public demonstrations by the opponents, or the regressive developments in Russia […]
read more
Report

On 17 May, the International Day against Homophobia and Transphobia is being marked. Every year on this day ILGA-Europe looks at progress made by European […]
read more
Report

Prior to OutGames and its International Human Rights Conference in Copenhagen in the end of this month where ILGA-Europe take part, we published a map […]
read more
Subscribe to our newsletter
Subscribe
loading...