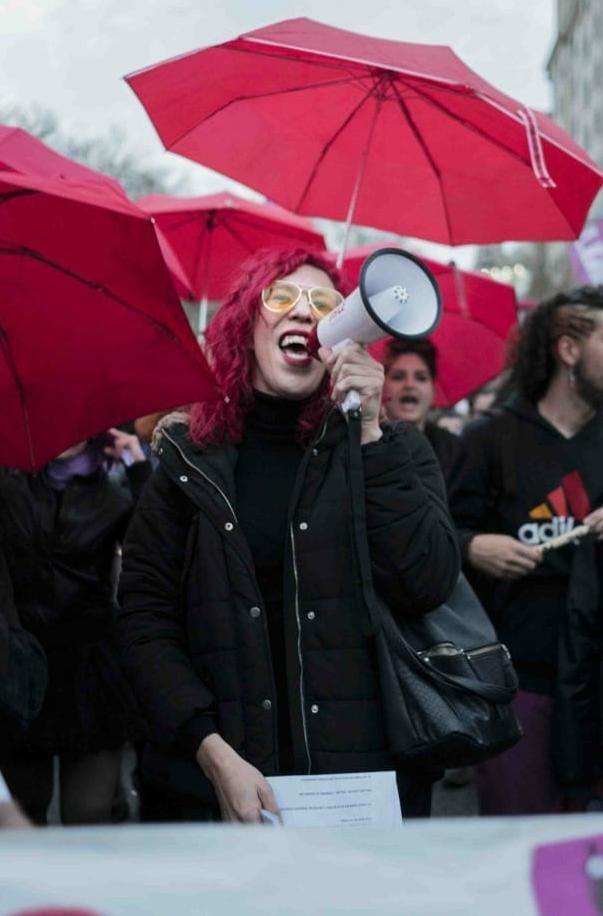 To mark #InternationalSexWorkersDay on June 2, we talked to Sabrina Sánchez, trans migrant sex worker based in Spain, on her journey, the pandemic and why sex workers rights are central to the LGBTI movement.

Sabrina Sánchez can say she’s mostly happy. Happy and tired. Last month, she attended the Trans United Europe conference in Amsterdam, supported by the No One Left Behind fund from ILGA-Europe. Just before our conversation she was at another meeting and later on the same day, she’s participating in an event organised by the Primavera Sound festival in Barcelona, the topic is “this sort of gentrification of sex workers’ aesthetics in music”. Finally, the Spanish Supreme Court has recently recognised the right of sex workers to unionise, thanks to the pledge of Spain’s Sex Workers Organisation (OTRAS). All in all, Sabrina is satisfied, but she could also take some time off.

Before joining the International Committee on the Rights of Sex Workers in Europe (ICRSE) as Programs Officer, her routine was already very similar to that of an office worker. “Contrary to what people think about sex workers, that we are only, exclusively night creatures, I wake up very early,” she says. “I have a breakfast, check my email. I try to go to the gym three times a week to keep in shape; it’s part of the business, but also to feel okay with myself.” Then, she may have an appointment with a client or may reply to questions from the sex worker’s community, all while keeping up with her personal life, making plans with a girlfriend, maybe, for a day at the beach.

Since she’s joined ICRSE, she goes to the gym less often but enjoys the financial stability. “It helps you to think better, to not worry how you’re going to have enough to pay your rent next month.” Originally from Mexico City, where she lived until the age of 25, Sabrina has been in Spain for over a decade. She doesn’t hold citizenship yet, as the bureaucratic procedures are far from straightforward.

Coming out, and a new life

“I am privileged enough to say that that I come from a family that supported my transition and my life decisions,” Sabrina says. “When my gender identity was revealed, my mother said: ‘Now there are more reasons for you keep studying. You have to go to college to get tools you will need, because it’s going to be a lot more difficult for you now.” This is a normal worry for parents to have, but, unfortunately, it’s often the contrary. Trans females are usually kicked out of the family home.”

After majoring in Communications at the National Autonomous University of México (UNAM), it was time for Sabrina to leave the country of her birth. “I knew that there was no future for transwomen in Mexico. And I always felt that that Mexico was not really my place. I didn’t belong there.”

She had some connections in Catalonia, but she hit a language barrier when she arrived. Spanish, her mother tongue, was not much help in a place where speaking Catalan is mandatory. “I decided to engage in sex work because my savings were already gone. I had no documentation, no language and I couldn’t even get a job cleaning houses.”

“The complete lockdown in Spain made it almost impossible for sex workers to earn a living,” she says. The measures in public spaces were not the only reason. “Everybody was watching, everybody was surveillant,” says Sabrina. “So, we couldn’t go about our work.”

The state provided insufficient protection. Those eligible for public aid only received about 60 euro per week, so sex workers collectives got together and organised a crowdfunding that raised 35,000 euro. “This sounds like a lot but it’s not much when you have you spread it among 350 people,” says Sabrina. When the lockdown relaxed and a curfew was put in place, street sex workers returned to public spaces in daylight, which got a lot of negative media attention. “Of course, they had to go back to work,” Sabrina says. “Nobody was giving them any money.”

Many regular clients disappeared because of the pandemic. “Guys were scared of getting Covid,” Sabrina explains. “Clients are usually the everyday men that surround us, they are your uncle, your dad, your brother. They didn’t want to get sick and give it to their families. Those thoughtful people, the good clients disappeared, and we were left to deal with the assholes.”

“Restrictions apart, what has affected sex workers most is the attitude of the people. In the context where sex work is criminalised, like in France, violence has risen a lot because you have this narrative of sex workers being criminals, or the ‘other’ — a group of the population who are not desirable. You can do whatever to us because we are not seen as actual workers. We are something to reject easily, or we are victims to rescue. You can give us a couple of cents and a sewing machine and should be happy now, because we are not ‘selling our bodies’.”

While across Europe we start to return to a semblance of the old days, the issues sex workers were facing before 2020 are still present. In Spain, there are two draft bills that could affect sex work, by criminalising their working premises or conflating sex work with trafficking.

“None of these laws addresses the structural problems that make us sell sex in first place,” says Sabrina. “They punish the client, but what if instead they created options for people who are in sex work because they don’t have access another jobs, people like trans women? If they created opportunties, then maybe less people would be put in a position where they have to engage in sex work. But no, they want to address socio economical problems with a penal code. That never works.

“By criminalising sex work, governments are reinforcing the scenario they say they want to save us from. Instead of regularising undocumented migrant sex workers, as has happened in Portugal, criminalisation may lead to directing more funding to anti-immigration enforcement. In countries like Sweden, who are deporting migrant sex workers, they are returning them to the hands of traffickers. They will want to come back to Europe and they will have to pay for that journey again.”

Sex workers and the LGBTI community

Sex workers have found resistance within the LGBTI movement too. Some say sex workers are not good for their image. “I’m talking mostly to the white, cis, gay men, who are the ones that have the privileges, the capital, and the money. But the ones that started the riots that ultimately led to such privilege, were two trans sex workers of colour.”

Sabrina is referring to Marsha P. Johnson and Sylvia Rivera, whose sparking of Stonewall riots over 50 years ago shaped Pride events around the world and the LGBTI movement as we know it today. However, as Sabrina asserts, Johnson and Rivera’s demands have still not been met.

“After all these years, we are still asking for the basic necessities: housing, work, and respect for our identities.”

In ILGA-Europe’s view, LGBTI organisations have a key role to play in fighting against stigma affecting LGBTI sex workers, both within and outside the LGBTI […]
read more
News

ILGA-Europe have launched a new position paper on the rights of LGBTI sex workers. Empowerment, combatting exclusion, and ‘nothing about us without us’ – these […]
read more
Subscribe to our newsletter
Subscribe
loading...