The World Cup ‘One Love’ Controversy: How the Media Got it Wrong 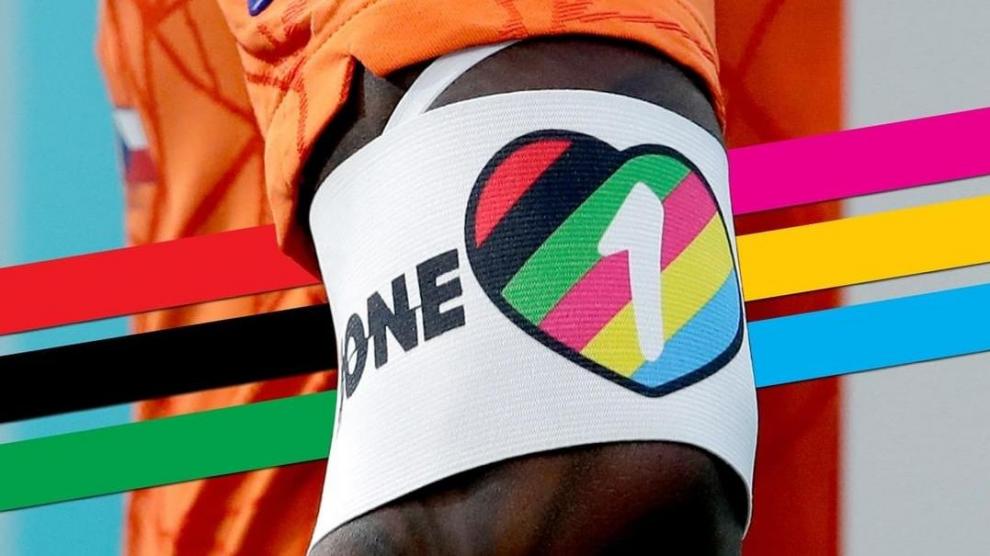 As the World Cup kicked off this year, the big news story became about FIFA banning of ‘One Love’ armbands meant to show support for persecuted LGBTI people in Qatar. But it created a dangerous “us versus them” narrative, says our Executive Director, Evelyne Paradis.

When FIFA effectively banned all European football players from wearing the ‘One Love’ armband while on the field at the World Cup 2022, it became the dominant news story as the games began. By wearing the armband, players and teams intended to highlight the dire human rights situation for LGBTI people in Qatar, where men who have sex with other men can be imprisoned, or at worst stoned to death. However noble the cause, though, according to our guests on our latest podcast episode, Evelyne  Paradis, Executive Director of ILGA-Europe, Ryan Heath, Editorial Director with Politico and Gurchaten Sandhu, Director of Programmes at ILGA World, the ‘One Love’ armband story created a tricky situation for LGBTI communities.

“On one hand, issues faced by LGBTI communities in Qatar needed to be named,” says Evelyne. “You need to react to a stand like FIFA’s. However, the amount of attention was striking, if we think that other pressing issues, like the situation of migrant workers or of women’s rights, which have had little or no attention from media and governments.”

The trouble, she adds, is that we are “constantly putting everything in silos and not looking at the broader picture, and why is it that this one issue is always singled out? Women’s rights, migrant worker’s rights, LGBTI rights… there are so many issues in Qatar that demand the world’s attention. However, only LGBTI rights were in the spotlight. While this could look only beneficial for LGBTI people, in reality disconnecting LGBTI rights from other human rights presents a number of risks in the long run.”

ILGA World’s Gurchaten agrees. “What we continue to see is a hierarchy of rights. Had we talked about human rights as indivisible, inalienable, we wouldn’t have been in this situation.”

Yet, LGBTI communities have been marginalised in the reporting of sports for so long, and Politico’s Ryan Heath, believes that for many journalists, reporting of the ‘One Love’ armband controversy is trying to reverse invisibility.

“It’s the wrong approach, but it’s trying to fix a bigger wrong in the past as well.”

The cost of oversimplification

“It’s oversimplified,” Evelyne adds. “Reporting like this tends to gloss over from the complexity of issues that communities face and that’s the problem at the moment, despite the good intention behind it.

“In the same week, the media were talking about the Colorado shootings and the armband. Yes, the media talks about LGBTI issues where it’s a real tragedy, when there’s violence or when there’s something that can be commercialised, but we know the lives of people are all between the two sides of that spectrum. Why is it so difficult to continue to talk about the situation of LGBTI people in Ukraine at the moment, for instance?

“The framing always is ‘either or’. Like, either you are a supporter of LGBTI equality or you are not. This doesn’t help us to get into the conversations. It doesn’t help to talk about prejudices, misgivings, lack of information people have.”

“The upside of things like the One Love armband controversy is that it gives attention to the issues,’ says Gurchaten, ‘but there is a moral and ethical responsibility in the way it’s reported. The issue is not black and white, there are several complexities and layers to the issue of LGBQ+ people’s rights. We haven’t had a framing to have that discussion.’

For Ryan, the problem is the attention span in a digital world. “You can write 40 paragraphs, that doesn’t mean anyone is going to read them,” he says. “The struggle with smaller and smaller is not going to go away in this internet-heavy media space we live in.”

Looking to the future

“We pick a lot on the media, but what kind of stories are we feeding into the media,” Evelyne asks, while Gurchaten remarks that ‘us versus them’ narratives are also damaging the LGBTI movement itself, “getting us distracted from the real issues, for example, when it comes to trans rights across the world.”

According to Ryan, “Journalists that are interested in covering LGBTI issues are now more visible, so it’s also easier for LGBTI activists to reach out. As with any of us, journalists also learn and evolve and can do justice to these stories in the future. We don’t move forward in a linear way. These are conversations that need to continue happening.”

Ryan ends on a hopeful note. “People [in the media] want to do their jobs right. The more conversations we have with them, the more progress we will get.”

LGBTI Activism 101: Connecting with the Media

It’s important that the media explores the issues that affect our communities in a realistic way, but for many LGBTI activists, getting journalists interested can seem difficult, if not impossible. Our latest activism Skills Boost sessions explored connecting to the media. Here’s what our participants learned.
read more
Podcast

ILGA-Europe’s Guidelines for Journalists is a set of clear recommendations in the form of ‘do’s and don’ts’ on how to cover LGBTI-related people and news, for media professionals who seek to be up to date on representations.
read more
Blog

COVID-19: How to communicate clearly as an LGBTI group

The COVID-19 crisis situation is changing every day, and as an LGBTI organisation you are going to want to keep your audience updated about what specifically matters to them. ILGA-Europe’s strategic communications consultant, Sho Konno, gives his key advice for communicating at this time.
read more
Blog

While the opponents of LGBTI equality might also be overwhelmed with COVID-19 and focus their attention less on LGBTI groups right now, the digital footprints we leave today will still be around for a long time to come, which could make us more vulnerable after the crisis is over. So, now that most of our activities have moved online, how do we stay safe and secure? Here are tools and tips from the ILGA-Europe Programmes & Policy team.
read more
Subscribe to our newsletter
Subscribe
loading...