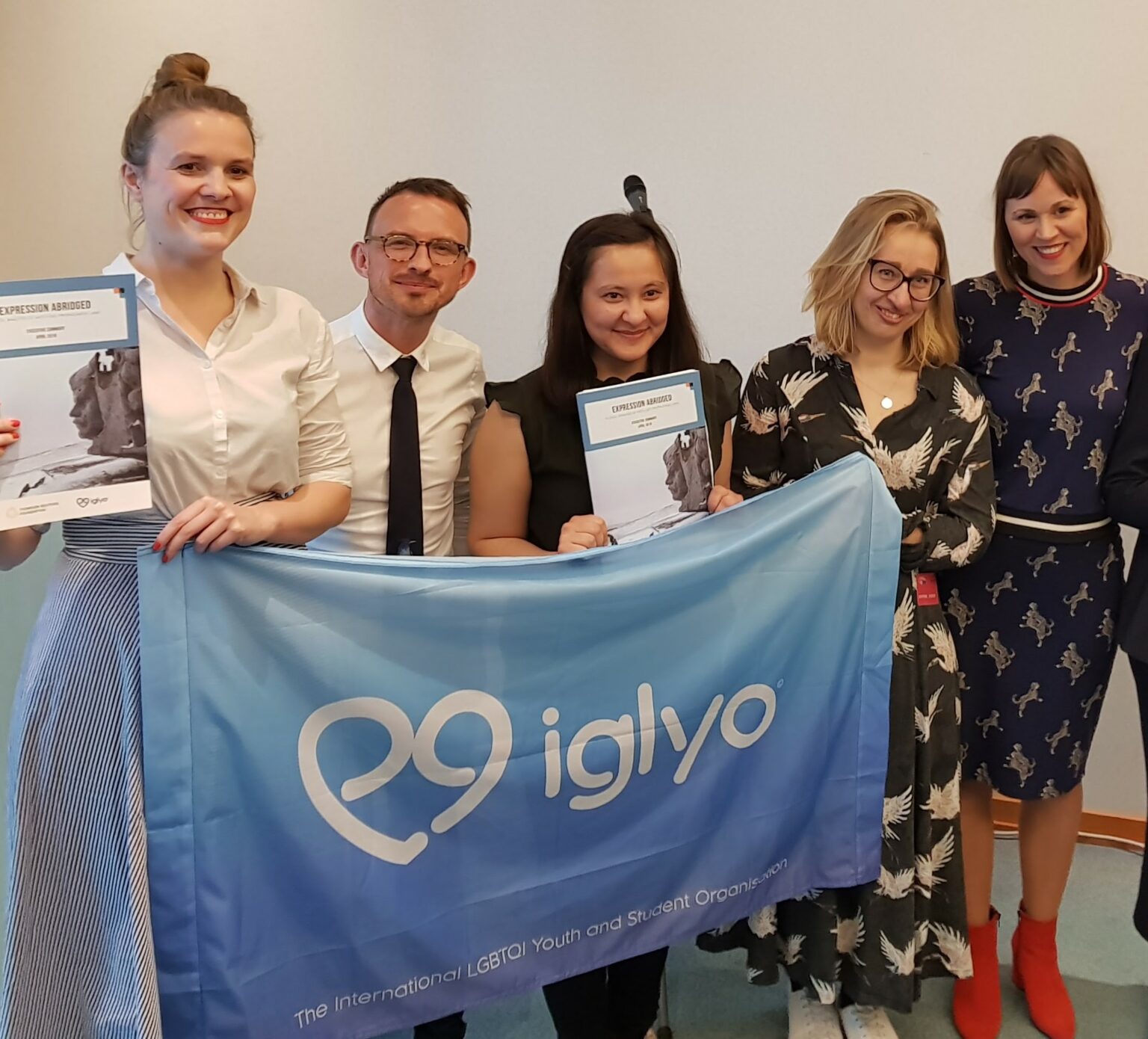 Officially launched at the European Parliament in Brussels on 24 April, the report contains a thorough legal analysis of the anti-LGBTI ‘propaganda’ laws that exist or have been proposed in Europe and Central Asia.

IGLYO’s Capacity Building Officer Tudor Kovacs pointed out that Expression Abridged is not only a useful resource, but can also be a valuable tool for activists in planning their activities or when challenging opponents who try to enforce or submit these laws for inclusion on the legislative agenda.

Everyone at the event was reminded that the Russian federal legislation, enacted in 2013, might be the most infamous of the so-called ‘anti-propaganda’ laws but it is not the only one. A bill seeking to introduce even harsher penalties is still being considered by Kyrgyzstan’s’ parliament – a fact that LGBTI activists Nadira and Anastasia underlined at the launch.

Our brand new Rainbow Map shows steps forward in LGBTI rights in several countries, spelling out that equality is at the core of democracy in Europe. But while some are pushing forward, others continue to instrumentalise LGBTI discrimination to erode freedom.
read more
Podcast

Every year, Rainbow Europe ranks all 49 European countries based on the laws and policies in each to ensure equal rights and protection for LGBTI […]
read more
Podcast

A survey of 71 organisations across 32 European countries finds that over 60% have worked with LGBTIQ youth experiencing homelessness, while homeless services lack the […]
read more
Report

In April 2021, ILGA-Europe in association with the LGBTIQ Youth Homelessness organisation True Colors United, and the Silberman Center for Sexuality and Gender (SCSG) at Hunter College published a report based on […]
read more
Podcast

“We need your help to change the lives of LGBTIQ homeless young people,” says superstar Cyndi Lauper in an exclusive interview about how her organisation, True Colors United, is teaming up with ILGA-Europe to tackle the unacceptable problem of LGBTIQ youth homelessness in Europe.
read more
Blog

Young LGBTIQ people are being made homeless every day in Europe. To tie in with our survey for LGBTIQ organisations about their experience of youth homelessness, a young person from Slovenia tells their story of self-discovery, and how bullying in their family forced them to run away.
read more
News

A new survey aims to guage the experiences of European and Central Asian groups and organisations when it comes to LGBTIQ youth homelessness.
read more
Press Release

Join us for the webinar An introduction to LGBTIQ youth homelessness and the role of LGBTIQ organisations on 27 September 2019 at 13.00 CEST. LGBTIQ homelessness is […]
read more
News

Be Yourself – new video by Single Step

One of our member organisations in Bulgaria, Single Step, have launched a new motivational video.  The video was created to inspire young people around the […]
read more
Report

Report by ILGA-Europe to the Social, Health and Family Affairs Committee of the Parliamentary Assembly of the Council of Europe
read more
Report

Young lesbian, gay, bisexual and transgender (LGBT) people across Europe face discrimination and exclusion in their everyday life. They experience estrangement from family, bullying and […]
read more
Subscribe to our newsletter
Subscribe
loading...