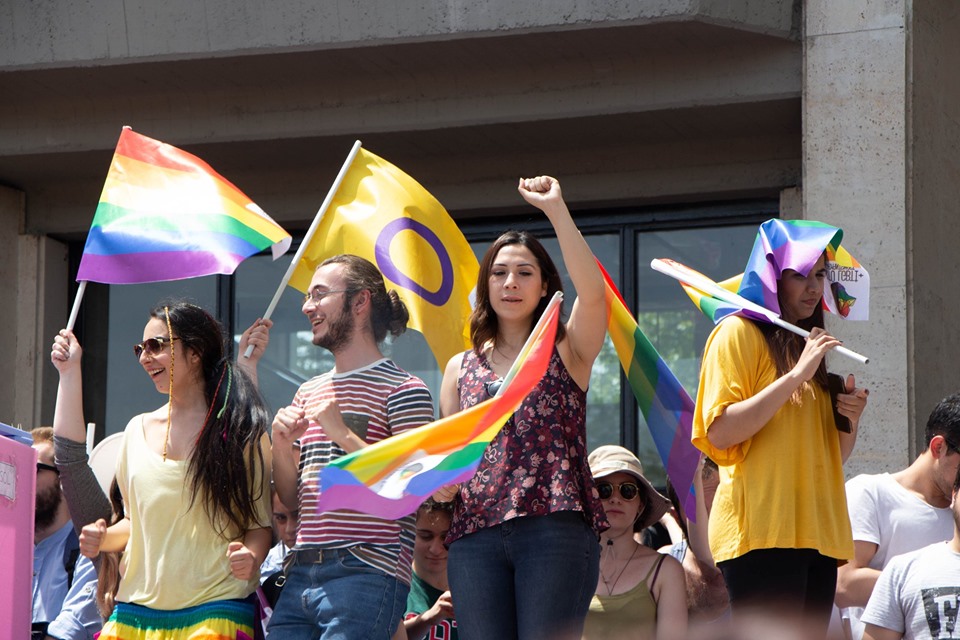 We, the undersigned human rights organisations, believe that the only just outcome in the unfair prosecution of 19 human rights defenders for their participation in a peaceful Pride march on the campus of Ankara’s Middle East Technical University (METU) on 10 May 2019 is their wholesale acquittal at their next hearing on 10 December at 09:00 UTC+3.

The human rights defenders face charges of “participating in an unlawful assembly” and “failing to disperse despite being warned,” despite the fact that earlier in the year, on 21 February 2019, the Ankara Administrative Appeals Court had lifted the blanket ban prohibiting all LGBTI+ activities in Ankara introduced under the state of emergency, which was used as the legal basis to ban the march.  The regional court lifted the ban on the grounds that it was unlawful and restricted rights and freedoms in unconditional, vague, and disproportionate ways.

METU Pride had been organised peacefully every year since 2011. However, on 6 May 2019, the administration of METU unlawfully banned the METU Pride march. Since the administration’s decision contravened the Ankara court’s ruling, activists and students exercised their legal right to freedom of assembly and gathered to proceed with their annual march. The university administration then contacted the Ankara Security Directorate asking them to intervene to prevent the march from taking place.

The police used excessive force on peaceful protestors on the day: tear gas and plastic bullets were fired at the crowd, students were dragged across the ground, pushed up against trees and sustained head injuries. The excessive force used during the police intervention is a clear violation of the right to peaceful assembly, which is protected under domestic law and international laws, including the European Convention of Human Rights, to which Turkey is a party.

Despite there being ample video footage of the police violence, to-date, none of the police officers seen using excessive force have been charged.  On the contrary, 18 students and an academic who were exercising their right to freedom of assembly were detained, charged and prosecuted, facing a possible prison sentence of up to three years.

In June 2020, the Ankara Administrative Court No. 7 made reference to the 2019 ruling by the Ankara District Administrative Court No. 12 which quashed the blanket ban on all LGBTI+ events in the capital in place since 2017, stating that “although specific assemblies and demonstrations may be banned, the right to peaceful assembly and demonstration should be protected as an inalienable right in a democratic society” and that “the State has an obligation to take necessary measures to ensure this right can be  exercised securely”. This ruling confirms that the METU administration’s ban on the May 2019 Pride March on campus had no legal basis.

We therefore call on the trial prosecutor to recommend the acquittal of all the human rights defenders at the hearing on 10 December, and for all the relevant authorities in Turkey to ensure that the security forces and METU administration uphold the right to freedom of peaceful assembly as enshrined in domestic law and international human rights law, by ensuring that future Pride marches at METU campus and in Ankara take place without obstruction. We also call on the Turkish authorities to conduct a prompt, independent and impartial investigation into the excessive use of force by the police on the campus, and for police officers responsible for arbitrary or abusive force to be brought to justice.

In our submission to the European Commission’s annual Rule of Law report, we’ve identified key trends in the systematic attacks on the rights of LGBTI […]
read more
News

Statement: EuroPride Goes Ahead in Belgrade Despite Calculated Obstruction

All at ILGA-Europe send our support and solidarity to the organisers of EuroPride and Belgrade Pride, the LGBTI community in Serbia and the Balkans, who […]
read more
News

Statement on the Ban of EuroPride Route in Belgrade

Today, the Serbian police announced an official ban on the route of the EuroPride march in Belgrade this coming Saturday. On August 28, the Serbian […]
read more
News

“Equality, justice and freedom are not matters that can be put aside when political and economic problems arise."
read more
Blog

How well protected are LGBTI public events in Europe and Central Asia?

Oslo Pride was cancelled on Saturday in the wake of terrorist attack near the city’s largest LGBTI bar, while over 373 Pride participants were detained in the Turkish capital of Istanbul. Meanwhile, after years of mounting tension and attacks in Poland, Warsaw Pride went ahead without any trouble this weekend. Here’s our overview of the state and protection of freedom of assembly for LGBTI people in the region.
read more
Blog

After 18 months of planning and work, the team at ILGA-Europe are proud to introduce our brand-new website. It shows the range of work we do and LGBTI activists and organisations can now easily find the information they need. Keep reading to learn more about how it was developed and how you can make the most of it.
read more
Blog

How businesses engage with LGBTI inclusion has changed enormously in the last decade. Today, more businesses actively seek to work together with civil society organisations, while these may find new allies in the private sector. If you are part of an LGBTI group and are considering to collaborate with companies as Pride season kicks off, this blog and our Frontline podcast mini-series are for you.
read more
Report

Hungary and Poland have been in the spotlight a lot for their anti-LGBTI policies, but they are not the only countries where political leaders are acting against LGBTI communities. Here, we take a look at the political situation for LGBTI people in Eastern Europe and Central Asia in the first half of 2021.
read more
Blog

In moments like these, where even our former allies are using us to advance their own political goals, pride and its value become ever clearer.
read more
Podcast

The author of 18 books of fiction and non-fiction, including The Bastard of Istanbul,Honour, and Three Daughters of Eve, Elif has come under fire from the Turkish authorities […]
read more
Blog

2020 proved to be a game-changer for LGBTI activists, sending almost every aspect of the work into the digital sphere. Luckily ILGA-Europe had been developing an online resource-sharing centre for a few years before COVID-19 hit, and we probably couldn’t have picked a better moment to launch it.
read more
Blog

LGBTI ENLARGEMENT REVIEW 2020 In order to ensure an accurate representation of the developments relating to the human rights of LGBTI people ILGA-Europe and ERA, […]
read more
Blog

Europe’s leading LGBTI+ rights organisation, ILGA-Europe are alarmed to observe that in the past week the Turkish government has stepped up its systematic attacks on and defamation of LGBTI+ people and calls on President Erdo?an to guarantee the fundamental rights of all minorities without discrimination, as enshrined in the country’s Constitution.
read more
Press Release

Turkey must uphold its domestic and international commitments, and dismiss all charges against 19 human rights defenders, prosecuted for their participation in a peaceful Pride march at Middle East Technical University (METU) in Ankara in May 2019, says Europe’s largest LGBTI rights umbrella organisation, ILGA-Europe.
read more
Blog

Mental Health: Dealing With Stress as an LGBTI activist

2020 has drastically altered our daily lives and as an activist it’s easy to put your mental health and wellbeing on the back burner, while you get on with other hugely pressing priorities. On top of this, LGBTI activists can suffer from particular mental health stresses that stream from discrimination, LGBTIphobia, and the uphill battle that working to secure our rights and equality can be. To mark World Mental Health Day, this blog brings you some tools to help you cope with challenges that come your way.
read more
Blog

Poland has reached a dangerous boiling point in its state-driven discrimination against LGBTI people. The first episode of ILGA-Europe’s podcast, The Frontline, goes behind the scenes to talk about a way forward for LGBTI activism in the country. Here’s what it’s all about…
read more
News

On the 30th of August, Odesa Pride tried to hold a peaceful gathering on one of the central streets of Odesa, Ukraine. Despite the fact that the group Tradition and Order were issuing threats before the event and came prepared to the gathering, where they acted violently, the authorities failed to prevent the attacks and ensure the freedom of assembly of the Odesa Pride participants.
read more
Subscribe to our newsletter
Subscribe
loading...