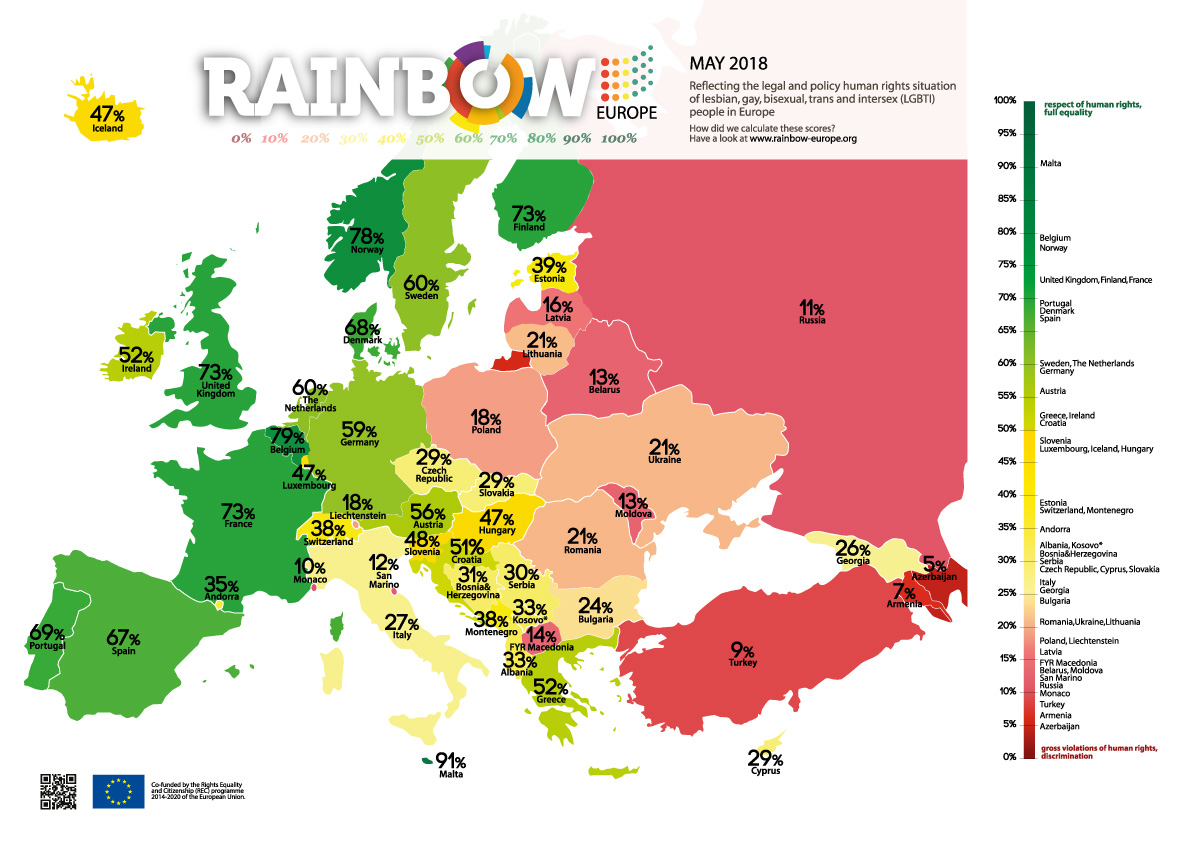 The 2018 Rainbow Europe package, launched by ILGA-Europe today, provides real evidence that progress on LGBTI equality law and policy is slowing down in Europe.

The 2018 Rainbow Europe Map and Index reveal that fewer countries are moving up the country ranking; many are stagnating, including countries that are traditionally perceived as equality ‘frontrunners’. ILGA-Europe’s annual benchmarking tool, which ranks 49 countries in Europe on their LGBTI equality laws and policies, reveals a region where advances are not being made at the rate they once were. This lack of sustained progress on LGBTI equality issues should set off alarm bells for policymakers and advocates alike.

“Against a backdrop of backlash on human rights across Europe, how can states possibly think the work on LGBTI equality is finished?” said ILGA-Europe Executive Director Evelyne Paradis. “The incredible achievements of the past decade are at stake. Let’s not make the mistake of thinking that we have achieved equality. There are too many signs that trends like populism and nationalism aren’t political buzzwords – they can have a lasting impact on the lives of LGBTI people in Europe.  There are too many signs around us that many of the recent wins are fragile. So let me say it again – we are nowhere near done.”

Unveiled in Lisbon this morning at an intergovernmental Forum in front of high-level government officials, the Rainbow Europe Map is a stark reminder for national governments and European institutions of how easy it is for complacency to set when it comes to enshrining rights firmly in law. Indeed, while Malta continues to feature at number one spot, other countries that are typically viewed as progressive are not among the Map’s frontrunners – including the Netherlands, who have actually dropped outside the Rainbow Europe top 10.

For ILGA-Europe, this stagnation is a worrying picture considering the current political climate of rising levels of populism, nationalism and civil society scapegoating, which have a particularly high negative impact on more vulnerable groups, like LGBTI people.

Joyce Hamilton, co-chair of ILGA-Europe’s Executive Board commented:  “Our communities unfortunately know all too well how vulnerable we are to undemocratic tendencies. Law and policies are often the last line of defence for LGBTI people so that is why we insist on making sure our countries’ legislation explicitly protects our human rights.

And this goes for everyone within our communities – ensuring full equality for LGBTI people has never and will not stop at marriage equality!  All governments in Europe have to pick up the pace, stick to their commitments and make legal protection a reality for all LGBTI people, particularly trans and intersex people.”

To the politicians in countries with consistently poor Rainbow Europe records and who claim LGBTI equality issues aren’t a priority, ILGA-Europe and our members stand firm:

“Avoiding your responsibility to work for LGBTI equality is not an option for any political leader or government official in 2018. Now is the time for them to show leadership by fully backing policies that make equality an everyday reality for the people they serve. Across Europe, the only way for policymakers to protect the great LGBTI equality advances of the last two decades is to build on them and commit necessary resources to ensure that the everyday life for LGBTI people is transformed for the better. I

LGA-Europe’s Rainbow Europe package gives policymakers (at every level of the country ranking) very concrete recommendations for where they can start to legislate and make a real impact – and our member organisations throughout the region have even more suggestions. We have all worked hard together for these advances. It’s time now to push hard to make them real for LGBTI communities everywhere.” remarked Brian Sheehan, co-chair of ILGA-Europe’s Executive Board.