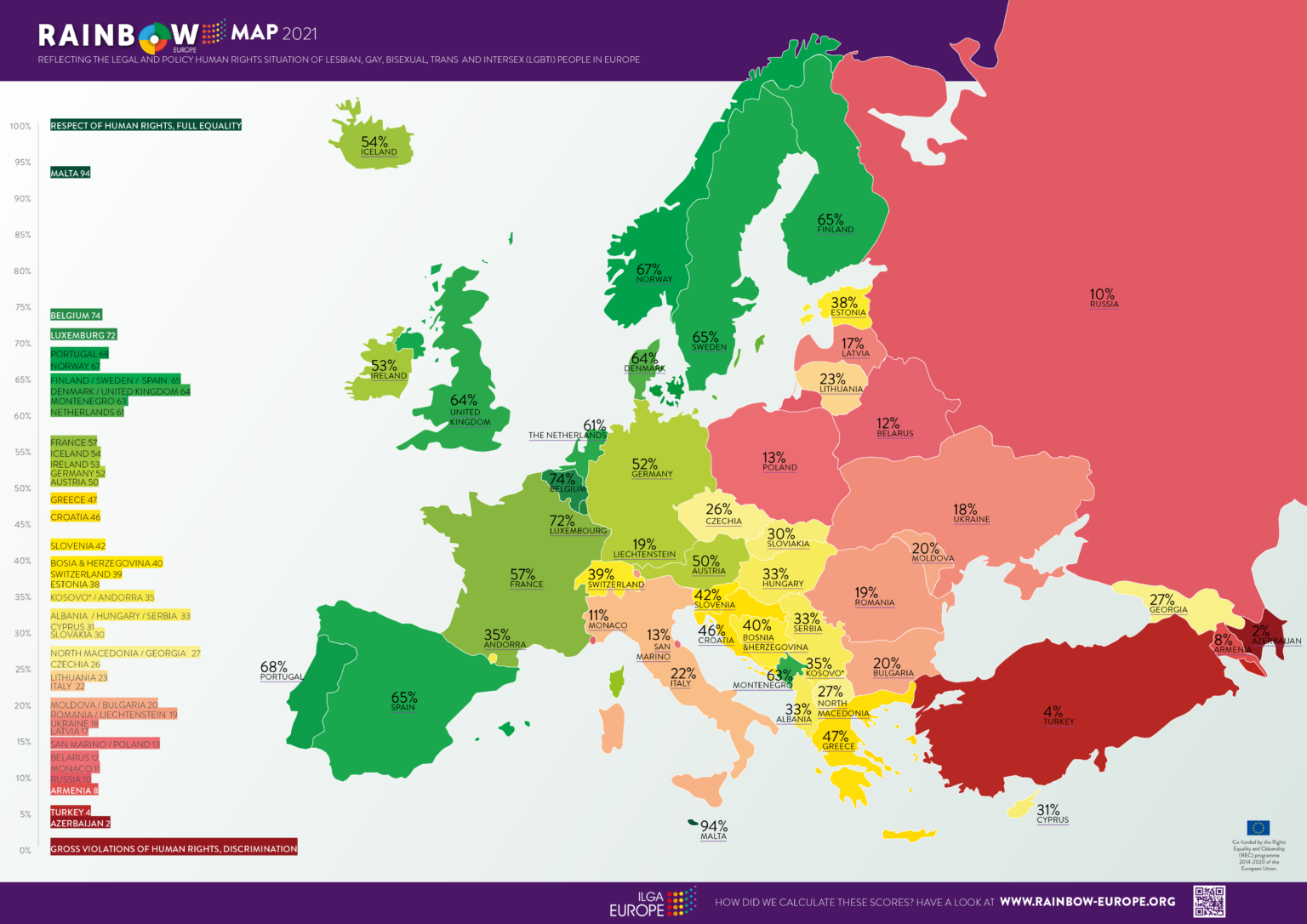 As the 2021 Rainbow Europe Map reveals widespread and almost complete stagnation on human rights of LGBTI people, we are at a juncture when governments can actively choose the right way forward, says leading LGBTI rights organisation, ILGA-Europe.

Published on Monday, May 17 2021, ILGA-Europe’s annual Rainbow Europe Map and Index, ranking the legal and policy situation of LGBTI people in 49 European countries, finds that over the past 12 months advances in LGBTI rights have come to almost a complete standstill. But, with legislative proposals and action plans on the table in some countries, governments now have the opportunity to ensure the Rainbow Map will look very different this time next year.

Released every year since 2009 on International Day Against Homophobia, Transphobia, Biphobia, and Intersexphobia (IDAHOBIT), the ILGA-Europe Rainbow Map ranks all 49 European countries on a scale between 0% (gross violations of human rights, discrimination) and 100% (respect of human rights, full equality). The past 12 months have marked an unprecedented year in the Map’s 12-year history, with almost no positive legislative change for LGBTI people in Europe.

Among the broad findings from this year’s Rainbow Europe Map are:

Executive Director of ILGA-Europe, Evelyne Paradis said: “It is deeply worrying to report an almost complete standstill on LGBTI rights and equality, especially at such a critical time for LGBTI communities. In the past year, we’ve seen increased political repression against LGBTI people, a stark rise in socio-economic hardship, and the spreading of LGBTI-phobic hatred on the streets and online across the region. Against this backdrop, the response from governments has to be more and better concrete action, to make sure people are more protected, not less. The human rights of LGBTI people simply cannot be something that you drop when circumstances are challenging.”

Katrin Hugendubel, ILGA-Europe’s Advocacy Director added: “So many legislative processes have been stalled in Europe over the past 12 months, in countries including Cyprus, Czechia, Denmark, Finland, France, Italy, Kosovo, Lithuania, Moldova, Montenegro, the Netherlands, Sweden, and the United Kingdom. We also see the implementation of existing procedures, for example on legal gender recognition, worsening, including in Georgia, Spain, Serbia and Northern Ireland”.

“It would be easy to blame it all on political attention being immersed in the public health response to COVID-19 and the ensuing economic fall-out, but the reality is a lot more complex. In too many countries, progress is stopped because there’s increased political polarisation on LGBTI issues, because some elected officials no longer see gains to be made by supporting LGBTI equality, and because governments don’t see it as a priority issue. We do really need governments across Europe to relaunch their political commitments to see legislative processes through, and to give everyone the means to ensure full implementation.”

Evelyne Paradis concluded: “There is a silver lining in this story: if governments actively choose to do the right thing and take real action, our Rainbow Map can look positively different by this time next year. At least 15 countries, including France, Kosovo, Bosnia & Herzegovina, Czechia and Ukraine, have legislative proposals, action plans and policy discussions already on the table. Others, such as Montenegro, have to make sure the laws they adopted effectively come into force, while many more know what they can and need to do to make sure their laws and policies have the desired impact for LGBTI lives.

“At a juncture in history when anti-LGBTI forces are rife, not only in headline-grabbing countries like Poland and Hungary, but across Europe, LGBTI people need all governments to seize this moment and make sure Europe remains a committed and active leader in the arena of human rights for everyone.”

The Rainbow Map and Index ranks 49 European countries on their respective legal and policy practices for LGBTI people, from 0-100%.

In order to create our country ranking, ILGA-Europe examine the laws and policies in 49 countries using a set of criteria. From May 2021, the number of individual criteria used has risen to 71, divided between six thematic categories: equality and non-discrimination; family; hate crime and hate speech; legal gender recognition and bodily integrity; civil society space; and asylum. More information on the list of criteria and their weight on the total score can be found at www.rainbow-europe.org/about

Rainbow Europe 2021 categories and the percentage ‘weight’ assigned to them remain exactly the same as the 2020 version. ILGA-Europe started assessing two new indicators: “Non-binary recognition” and “Legal gender recognition procedures exist for minors”. They are included under the category of legal gender recognition and bodily integrity; and the percentage ‘weight’ has been altered to accommodate these two new criteria.

Alterations to our criteria make year-on-year comparisons difficult, but certain lessons are clear – countries that are expanding their legislative horizons are moving up in the ranking.

Policymakers, researchers and journalists are able to go ‘behind’ the points and see the original information sources that we base our Map and Index ranking on. This additional layer of information is available through our updated Rainbow Europe web module, www.rainbow-europe.org.

For the sixth year in a row, Malta continues to occupy the number one spot on the Rainbow Europe Map, with a score of 94

Belgium comes second place for the fourth time with a score of 74%.

Luxembourg receives 72 points and occupies the third spot on the ranking for the third year in a row.

The three countries at the other end of the Rainbow Europe scale are Azerbaijan (2%), Turkey (4%), and Armenia (8%), exactly the same as last year.

Denmark is the country with the most dramatic drop in its score, losing 3.80% points in relation to the irregularities for the criterion on depathologisation, with access to trans-specific healthcare still linked with a mental health assessment in the country.

Georgia has also dropped by 3.73% due to the lack of clear procedure for legal gender recognition and the risky situation of LGBTI human rights defenders in the country.

Another important deduction happened, with Ukraine losing 3.5% points due to the expiration of the government’s action plan.

North Macedonia and Bosnia & Herzegovina had a big jump in their scores and rankings, due to the fact that freedom of assembly has been improving in both countries.

Equality action plans have expired in Albania, Norway, and Ukraine, while France and Kosovo have shortcomings and implementation problems with their action plans. Finland, Ireland, Sweden, and Germany’s Saarland region’s action plans were the only new ones that received points this year. Governments in Bosnia & Herzegovina, Czechia, and Ukraine are in the process of preparation of their next action plans.

Portugal and Northern Ireland (UK) revoked all restrictions on LGBTI people for blood donation, making it possible for everyone to donate blood safely and equally. Ukraine announced a similar change, but it hasn’t been enacted yet.

Recognition of family legislation is stagnating across Europe. This year, there was no single legal or policy change affecting LGBTI people.

Norway was the only country to extend legal protection from hate crime, amending its Penal Code to add gender identity ground.

Since 6 January, 2021, legal recognition for non-binary people has been implemented in Iceland, making it the only country in Europe to advance trans rights in the last 12 months.

Trans-specific healthcare became almost impossible to access in Northern Ireland. Activists’ reporting has revealed that trans people are unable to access the medical reports required to go through these processes without paying for private care, thus creating a class barrier to accessing LGR.

North Macedonia and Bosnia & Herzegovina have had no state obstruction of freedom of assembly within the past three years and Pride events were adequately protected by police.

Poland’s civil society space has shrunk more this year, because people are being actively attacked by the police during public events, instead of being protected. Poland also lost points related to freedom of expression, due to the anti-LGBT resolutions that have been passed by local governments.

The other country with a negative trend in this regard is Georgia, which lost points with LGBTI human rights defenders at risk, due to a large number of attacks over the last 12 months.

Malta introduced new amendments to the Refugees Act and published new guidelines on asylum claims. This was only development regarding protection of LGBTI asylum rights in the last 12 months.

Finland’s policies regarding LGBTI asylum seekers were criticised by LGBTI civil society for being only project based and not creating any systematic approach or policy. Points were deducted by ILGA-Europe from Finland, based on this report.

Both elements of our Rainbow Europe package complement each other, giving both the legal and narrative overviews. Currently the countries of Central Asia are not […]
read more
Report

As the 2021 Rainbow Europe Map reveals widespread and almost complete stagnation on human rights of LGBTI people, we are at a juncture when governments can actively […]
read more
Report

ILGA-Europe Rainbow Map and Index 2020 reveals that once-leading countries in Europe are falling behind in their commitments to equality for LGBTI people. Key findings […]
read more
Subscribe to our newsletter
Subscribe
loading...