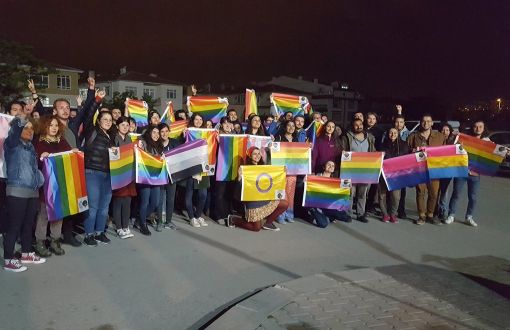 On 12 November 2019, 19 LGBTI+ rights defenders will stand trial, charged with “participating in an unlawful assembly” and “resisting despite warning” for   attending the peaceful LGBTI+ Pride March at the Middle East Technical University (METU) campus in Ankara on 10 May 2019.

The 19 (18 students and one faculty member), were among 22 people who were arrested during the Pride March in METU, after police forces entered the university campus at the request of the university administration.  Police dispersed the crowd using pepper spray, tear gas and plastic bullets. All 22 arrested were released later that day.

Speaking on behalf of the four organisations, Björn van Roozendaal, Programmes Director for ILGA-Europe said, “The defenders were practising their right to assembly and standing up for the rights of others in a peaceful manner when the police attacked and arrested them.  No one should be prosecuted for exercising their right to peaceful assembly. All charges against the human rights defenders should be dropped immediately, and this case should be closed.”

The Pride March was organised by METU LGBTI+ Solidarity, a student group established in 1996,  which works to secure gender equality, eradicate on-campus LGBTI+ phobia, and ensure that the university is a safe space for LGBTI+ people. The group has been organising Pride Marches on the campus every May since 2011.

On 6 May 2019, shortly before the METU Pride March, the university Rector, Mustafa Ver?an Kök, sent an email to all students, graduates, and faculty members, informing them that the Rectorate was prohibiting the event.  He referred to the ban on LGBTI+ events in Ankara, issued by the Ankara Governor’s office on 3 October 2018 and warned that the Rectorate would ask the Ankara Police to intervene if the event took place. When the Pride March commenced, the police violently dispersed students.

Twenty-one students and one professor were taken into police custody.  Shortly afterwards, the university opened administrative investigations against the students who participated in the Pride March. On 5 August 2019, 19 of the 22 arrested LGBTI+ rights defenders were notified that a criminal case had been opened against them, related to the charges of “participating in an unlawful assembly” and “resisting despite warning”  under Article 2911 of Turkish Penal Court.

In November 2017, using the state of emergency powers, a blanket indefinite ban on public events focused on LGBTI+ rights was issued in Ankara. Despite the ending of emergency rule in July 2018, the Ankara Governor’s office did not lift the ban. On the contrary, on 3 October 2018, the Governor’s office informed law enforcement and other relevant authorities of a new ban, without giving any indication of when it would end.

On 19 April 2019, the Ankara Administrative Appeals Court lifted the ban introduced under the state of emergency, on the grounds that it was unlawful and restricted rights and freedoms in unconditional, vague, and disproportionate ways.

The four organisations said “We would like to remind the authorities that the state’s duty is to take security measures to protect peaceful assemblies and events, not ban them. The government should carry out a thorough and impartial investigation into the excessive use of force during the event, instead of prosecuting the human rights defenders. We reiterate our call to the authorities to drop all charges against the 19 defenders and ensure that all human rights defenders in Turkey are able to carry out their legitimate human rights activities without fear of reprisals and free of all restrictions.”

LGBTI ENLARGEMENT REVIEW 2020 In order to ensure an accurate representation of the developments relating to the human rights of LGBTI people ILGA-Europe and ERA, […]
read more
Press Release

Europe’s leading LGBTI+ rights organisation, ILGA-Europe are alarmed to observe that in the past week the Turkish government has stepped up its systematic attacks on and defamation of LGBTI+ people and calls on President Erdo?an to guarantee the fundamental rights of all minorities without discrimination, as enshrined in the country’s Constitution.
read more
News

On the 30th of August, Odesa Pride tried to hold a peaceful gathering on one of the central streets of Odesa, Ukraine. Despite the fact that the group Tradition and Order were issuing threats before the event and came prepared to the gathering, where they acted violently, the authorities failed to prevent the attacks and ensure the freedom of assembly of the Odesa Pride participants.
read more
Press Release

We call on Turkey to respect, guarantee, protect and fulfil the fundamental rights of the LGBTI community without discrimination as enshrined by its Constitution and equality article therein (article 10), and ratified by human rights treaty bodies.
read more
Report

LGBTI ENLARGEMENT REVIEW 2019 In order to ensure an accurate representation of the developments relating to the human rights of LGBTI people ILGA-Europe and ERA, […]
read more
Report

Joint public statement from Amnesty International, ILGA-Europe and All Out calling on authorities to ensure istanbul Pride takes place As the annual Istanbul Pride due to […]
read more
Press Release

LGBTI ENLARGEMENT REVIEW 2017 This report reflects developments in LGBTI people’s rights in each accession country since October 2016, in particular in reference to recommendations […]
read more
Campaign

Get involved with ILGA-Europe’s plans for Pride season! Join in with our PrideWatch social media campaign this summer.  Freedom of assembly is vital – for […]
read more
Report

Prides against Prejudice. A toolkit for pride organising in a hostile environment

This toolkit is intended to provide ideas and information resources for those wanting to organise Pride events in a hostile environment. The need for it […]
read more
Report

Handbook on Observations of Pride Marches

This Handbook, published in June 2006, has been designed for people and organisations who are thinking of monitoring human rights abuses occurring during Pride marches. […]
read more
Report